The History of the Taverners

Originally established in 2011 to support Plymouth Argyle Football Club through their administration, the success of the Green Taverners has by far exceeded any expectations.

From a tent to a venue

The small group of volunteers have developed into a larger network of local people, who have raised an extraordinary amount of money for charitable organisations and causes over the years. Starting off selling cans of beer from a tent, the growth of the GT’s over the short period of time has been astounding. The Green Taverners have now funded the two-story supporter’s bar by securing investment in excess of £1mil, and have a business strategy in place to pay back investors over the next 7 years. 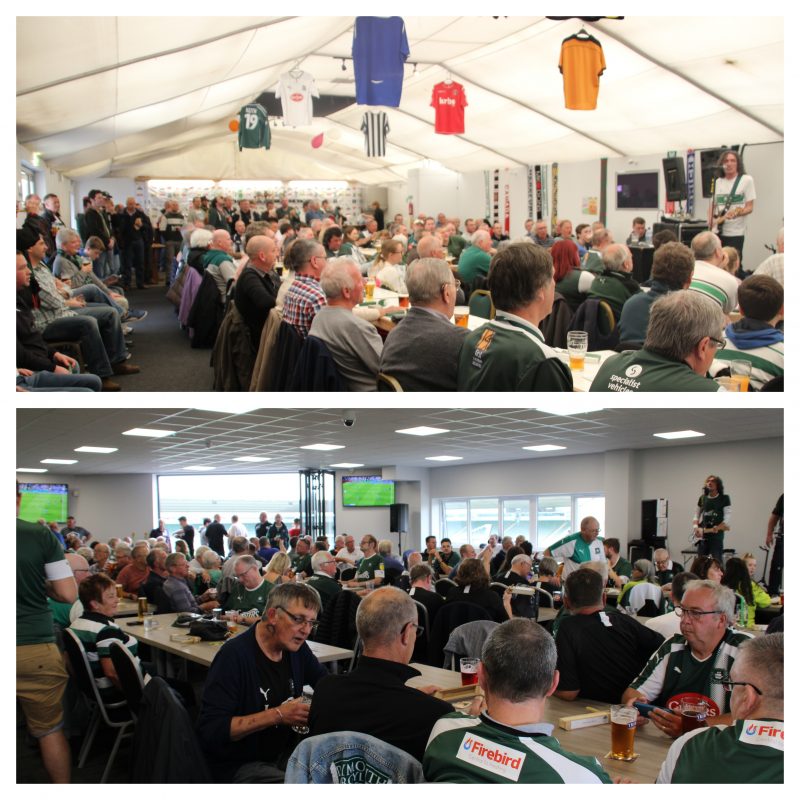 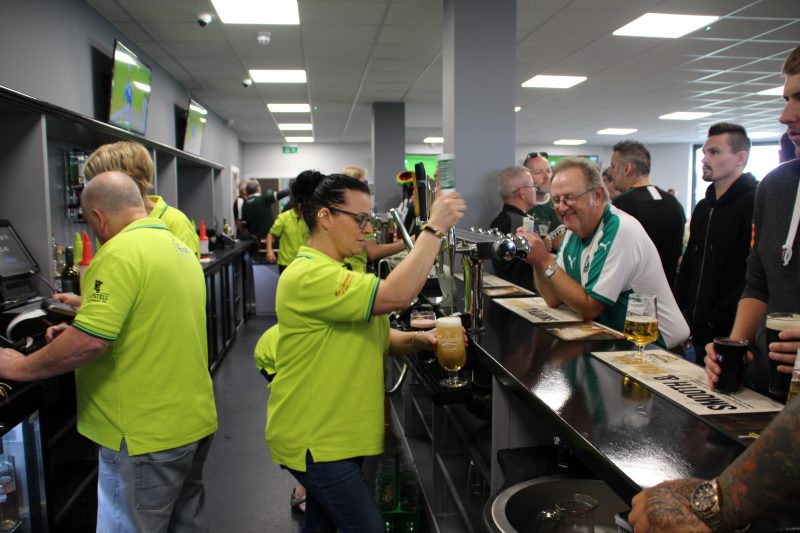 It is the hard work, dedication and family-feel of the Green Taverners that perfectly combine to offer a friendly and professional service. The GT’s also have an extensive network of investors, volunteers, and members for each of which we are very appreciative.

Gone but not forgotten

William Kilroy, affectionately known as ‘Bill Bob’, was a co-founder of the Green Taverners and an inspiration to all who knew him. Bill Bob sadly passed away in 2016 after a long battle with cancer.

His heart and passion was instrumental in establishing the GT’s, and they all hope to do him proud in continuing his legacy. 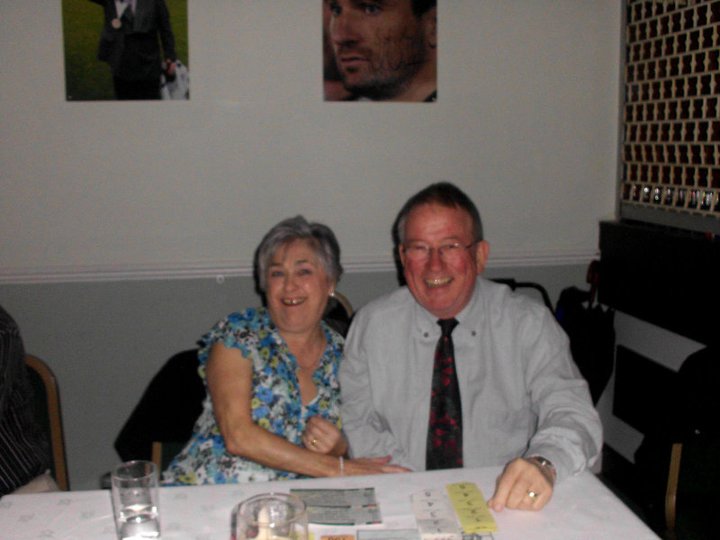 2011 - Established
Established in 2011 to support Plymouth Argyle Football Club through their administration, Green Taverners aided the club in various ways including travel to away games, staff wages and the everyday running of the club. The main focus for the group of volunteers was to ensure that the unpaid staff at the club received their wages, which they are proud to announce was accomplished in 2014 for all staff who entered their accelerated payment scheme. It was the dedication and commitment of these staff who kept Plymouth Argyle running through their troubles. The reception and support for Green Taverners was phenomenal, and the group of loyal volunteers were keen to keep on giving. Therefore, the GT’s continued to fundraise for organisations surrounding Plymouth Argyle and the local community. The illustrious Fanfest generated a large percentage of the funds raised over the years, and remains a great way for the Argyle fans to enjoy entertainment prior to every home game. A percentage of profits from the events were donated to Plymouth Argyle to help with community projects, so fans could enjoy a drink or two whilst supporting their beloved club and its local community.
2012
In 2012, fundraising took a different direction and Green Taverners hosted a ‘Legends Weekend’ at Home Park, with Manchester United Legends VS Plymouth Argyle Legends being the highlight of a weekend of activities. This included gala dinners, meet and greets with the players and a golf day. This was a fantastic event for the city of Plymouth, and helped to generate considerable funds to pay back Plymouth Argyle staff.
2013
Throughout 2013, the demand for Fanfest’s increased, and as a result became a weekly occurrence throughout the season. As Plymouth Argyle were no longer in administration, the GT’s focused on supporting organisations around the club including the Argyle Academy. It was the support of the GT’s that enabled Argyle Academy to travel to Northern Ireland to compete in the Milk Cup after missing out on the 2012 competition due to lack of funds. This allowed Argyle youth to compete with some of the best youth teams in the world.
2014
2014 was a landmark year for Green Taverners, as they achieved their initial goal of paying back the Plymouth Argyle staff who had not been paid due to the club entering administration. The fact that many of the Argyle staff were unpaid but continued to work at the club shows the passion they have for their local team. GT volunteers also dedicated many hours and a lot of energy putting on events and raising funds, all to benefit their beloved team.
2015
2015 marked a new chapter for the Green Taverners, with a shift in focus to not only support Plymouth Argyle and their surrounding organisations, but to also raise funds for charities throughout the country. GT’s tried their hand at a different method of fund raising during this time, and looked to enhance their profile in order to reach a wider audience to assist with future opportunities. The Fanfest staple ‘Janner Song’ was launched as a charity single to raise the profile, whilst also benefiting the Chestnut Appeal.
2016
2016 saw a turning point for Plymouth Argyle, with the club reaching the play off finals. Being at the forefront of assisting the club for over five years, the Green Taverners were delighted to see the club making strides to get back to where they belong. With Fanfests selling out every week, the GT’s were able to support Argyle Community Trust, PADSA, Argyle Academy, Senior Greens and the Argyle Ladies Team, as well as nationwide charities throughout the year. The success of the GT’s since this was established is a credit to the loyal and hardworking volunteers, all of whom are passionate fans of the club.
2017
2017 saw the GTs hire their first paid member of staff due to the demanding nature of the industry and things quickly started to change. The GTs were able to offer a lot more events and resulted in a packed out calendar full of events. With procedures and documentation now in place, gone were the days of driving down to St Austell Brewery on the day of an event due to forgetting to order stock.
2018
2018 The Green Taverners embarked upon their most ambitious project to date. Not only did the GT’s lift up on old tent and deliver it to a new location earlier in the year, the GTs started designing and seeked the funding of a £1 million two-story supporter’s bar. The Green Taverners secured a seven year lease deal with Plymouth Argyle, with an agreement that Plymouth Argyle would use the ground floor for the first 12 months of operation whilst the club facilities are being developed, and from there on the GT’s would run the bars on both floors. The Green Taverners have received pledges in excess of £500,000 from volunteers and business all keen to help make the project a success.
2019-20
2019 The Green Taverners received pledges in excess of 1 million, ensuring they had the finances to commence with the development of the new facility. A re-payment programme was agreed with all investors, and the GT’s started a membership scheme. This is to ensure our investors and shown gratitude, and they are able to get tickets to Fanfests and Green Taverners events prior to public sale. The membership scheme was open to all regular Fanfest attendees, many of whom have signed up.

Get in touch to learn how to join

Keep up to date with the taverners

Join our newsletter to receive the latest news and offers